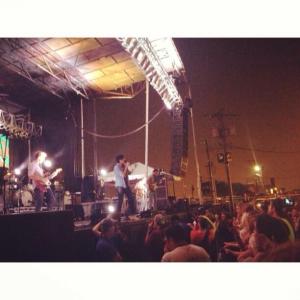 I attended A.V. Fest/Hideout Block Party this weekend. For those not familiar with it, The Hideout is bar located just off of Elston Avenue, on the industrial area nestled between Wicker Park and Lincoln Park on the shore of the Chicago River.

Named The Hideout since it opened (legally) in 1934, the bar’s located in a balloon-frame house built in two days and still standing in 2013. For the past 17 years the bar’s block party has been a staple of the Chicago music scene.

The block party is also located next to the Chicago Fleet Management Department and usually has a contingent of garbage trucks parked nearby, so the music festival will often smell like hot garbage juice. Thankfully by the second day of the festival the winds had shifted so the smell was mostly blown south of the block party.

The Hideout’s co-owner is Tim Tuten, a former history teacher who now splits his time between Chicago and Washington, D.C. because he also works for Education Secretary Arne Duncan.

“It’s an old Texas tradition, actually. My wife Katie attended the University of Texas from 1980 – 85— this was way before South by Southwest—and bars and restaurants there would always throw barbeques for anniversaries and birthdays,” said Tuten. “We were already going to Hideout for 10 years before we bought it in October 1996 and we thought it would be a good idea to throw an Austin-style party for a few friends and regulars. Obviously, more than that came to celebrate.”

This is the third year that The A.V. Club has partnered with The Hideout to put together the block party and Tuten likened the relationship to an old house with solid foundations that can have additions built onto it.

“I feel it’s a perfect match. Saturday’s lineup, with Superchunk, The Walkmen, Young the Giant. It resonates more with The A.V. Club’s audience but it’s actually a nice cross-pollination. There’s a continuity between what we do with the newer things they’re bringing to the festival,” said Tuten. 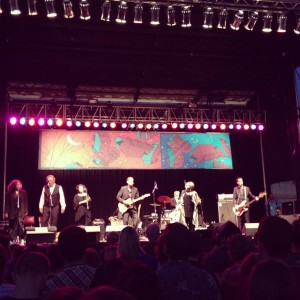 This year’s line up featured Neko Case, Mavis Staples, Young The Giant, The Hold Steady, The Walkmen and The Both (Aimee Mann & Ted Leo) among others. The two big draws for me were Mavis Staples and Neko Case, but I was pleasantly surprised by other artists on the line up that I knew next to nothing about.

Tuten has said that he likes to frame the music at The Hideout into a historical context. This couldn’t have been more true of Mavis Staples’ set, which referenced the recent 50th anniversary of Rev. Martin Luther King, Jr.’s “I Have a Dream” speech at the Lincoln Memorial in Washington D.C.

Staples is Chicago’s premier rhythm, blues and gospel singer. At 74 she recently underwent knee surgery but her that didn’t keep her fiery spirit from belting out earth shattering vocals and with an intensity that transformed the festival into a devout congregation. The audience was singing along and hand clapping while she sang the civil-rights anthem “Freedom Highway.” During her set Staples also played tribute to her late friend Levon Helm with a cover of The Band’s “The Weight.” Slapping her chest she demanded, “Put the load, put the load, put the load right on me.”

The crowd was rapturous. 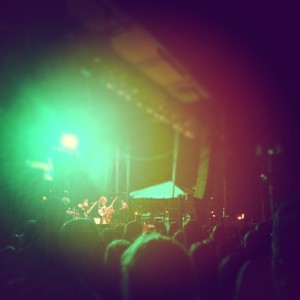 One standout performance during Case’s set was for the song “Nearly Midnight, Honolulu.” The a capella song is an eerie, intense melody that Case said was inspired by a real life incident she witnessed while waiting for a flight at an airport in Hawaii.

“I was waiting for a shuttle to go to the airport and a mother with a little girl who was about 5-ish, I think, and the little girl was singing a song to herself. She’s being cute,” said Case. “And the mom was screaming at her — ‘Just get the F away from me.’ Like, ‘Don’t you ever shut up?!’ And I was like, ‘That’s too close to home.'”

Case’s lyrics and band mate Kelly Hogan’s harmonies were able to pierce the crowd noise as their naked vignette grew with emotional resonance for the crowd. An impressive feat and a testament to Case’s stage presence as this type of song would have normally been a non-starter in a festival environment. 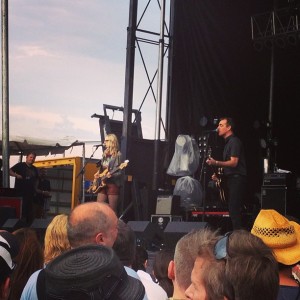 On the second day of the festival I was pleasantly surprised by Ted Leo and Aimee Mann’s The Both. The duo each have a slightly weird but funny stage presence and their onstage banter won me over just as much as their music.

“Are you wearing a priest shit?,” Mann.

“Yes, yes I am. But without the white-collar thing. But it’s a summer weave priest shirt, because sometimes priests have to work in the summer. If you want to call it ‘work,'” Leo.

They also made light of the fact that during their set they stopped to ask the sound person to adjust Mann’s levels as she was being slightly drowned out by Leo. This exchange was as entertaining as their set list.

What’s cool about The Both is that Leo and Mann’s unique sonic identities are felt throughout the band’s music. For instance when Mann would veer into using ambling minor chords for the backbone of a song Leo would add a dynamic riff or energetic chorus to it. The result was catchy power pop rock music. I’m really looking forward to the record they said is supposed to be out sometime this February.

Additionally the block party had a wide variety of  affordable and delicious food truck vendors. However both my girlfriend and sister agreed that there was one food truck that stood shoulders above the rest. 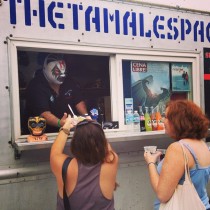 “The clear winner, if there were a food truck contest, is Tamale Spaceship,” said my girlfriend. She was also excited and impressed that the truck was selling Jarritos.

“JARRITOS!!,” she screamed once she saw them.

Overall Spending $60 for two-day passes to the block party is a small price to pay for the experience of being able to see such quality acts at The Hideout.

The weekend of Sept. 10 I’ll be covering Humboldt Park’s Riot Fest for Extra News, so be sure to check back here for my musings on that festival. Ω