Pilsen wasn’t always a bastion of Mexican culture in Chicago. It was Czech, specifically Bohemien. The neighborhood’s namesake comes from the city of Pilzen in western Bohemia in the Czech Republic. Chicago, around 1915, had the largest population of Bohemians outside of Prague. Most of them lived in Pilsen.

The shift in demographics began in the 1960s when working class Mexicans began to move to Pilsen when the University of Illinois in Chicago, just north of the neighborhood, decided to expand its campus. This pushed a lot of hispanic families that lived by UIC south of the train tracks that run parallel to 16th Street and west of Canal Street. Over time more of the Czech families that lived there culturally assimilated into the United States and moved to other neighborhoods or the suburbs.

By 1970 people of hispanic decent had become the majority in Pilsen. It was the tail end of this era that I would visit La Casa Del Pueblo with my family. Czech and Mexican immigrants both came to Pilsen because they could afford to raise a family there while also setting up a cozy working class community based around their homeland’s culture. By the beginning of the 21st century the area’s gentrification was well underway.

My rediscovery of Pilsen happened after I graduated from college in 2009. I was struggling to find work as a journalist for two reasons: 1) I had the ill luck of graduating with degrees in journalism and history at the height of the recession and 2) I was dumb enough to try to start a career in the dying newspaper industry in the middle of a recession.

After some odd jobs and reading a few million “Thank you for your application but we have already filled the position” emails from editors I was finally able to finally land a gig at a community newspaper startup in Pilsen. It’s name was Adentro de Pilsen and it was a joint project between Loyola University and Benito Juarez High School funded by a grant from the Chicago Community Trust. The publication functioned as a news website and quarterly newspaper that focused on neighborhood news related to the Pilsen area. Its main contributors were college and high school students, a few freelancers and myself. I was editor in chief of this small news organization with a shoe string budget thanks to the recommendations of a few of my journalism mentors from college.

During my brief tenure as editor (the paper’s non-profit funding would eventually dry up and I would move on to juggling a design job and a staff reporter position at another newspaper) I was able to rediscover the Pilsen area and learn its history. All the while reporting on lead pollution from Fisk Power Plant, gang violence, the post-census gerrymandering of the 25th Aldermanic Ward and Alderman Danny Solis’s reelection campaign. 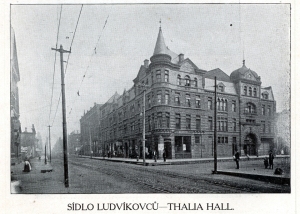 Over the past fifty years Mexican culture may have permeated most of Pilsen, but while exploring the areas I found echoes of Bohemia at places like the property on 1227 W. 18th St. Most recently it was an Italian restaurant named Al Teatro Ristorante but years ago it was known as Thalia Hall.

Originally built in 1892, Thalia Hall served as a playhouse, concert venue, movie theater (eventually) and town hall for the Czech community in Pilsen. In 2009 while working on a story for Adentro I ended up talking to Giuseppe Burlando, the then owner of the building who was in the process of restoring the theater to its former guided age glory.

When Burlando had purchased the property from the previous owner it had fallen into severe disrepair. There was graffiti and structural damage from the general neglect of the previous owner, who was too old to keep up with the maintenance of the building or bring it up to code with the city. Declared a national landmark in 1989, the building’s doors were left open and the theater was overrun with the homeless and people throwing raves and hosting metal shows throughout the mid to late 1980s. Burlando ended up going into foreclosure and Ridgestone Bank took the property back in 2012, leaving the building barely half restored.

The raves and metal shows that were held at Thalia Hall were just the first wave of the middle class twenty-somethings that would be part of the gentrification of the area in the early 2000’s. Ω